THREE attackers including a suspected suicide bomber and a man with a samurai sword have been shot dead in Riau police station, Indonesia.

THREE attackers including a suspected suicide bomber and a man with a samurai sword have been shot dead in Riau police station, Indonesia, according to an internal police report as the country has seen a wave of bombings.

One of the suspects was thought to have a bomb strapped to his body.

Another man was arrested and four others were suspected to have fled the scene, according to the report.

The report said the men had driven their car into the police yard before getting out to stage the attack.

State news agency Antara said two journalists who had been at the police headquarters were also hurt in the attack.

TV footage showed one man lying on the ground with a long sword next to his body.

Indonesia has seen a series of bombings in recent days including ISIS suicide bombers using children.

On Monday a family of suicide bombers, including an eight-year-old girl, waged a series of attacks using pipe bombs made from a chemical called “Mother of Satan”.

It came just 24-hours after another family which included parents and four children aged nine to 18, carried out suicide attacks on three churches in Surabaya, Indonesia’s second largest city. 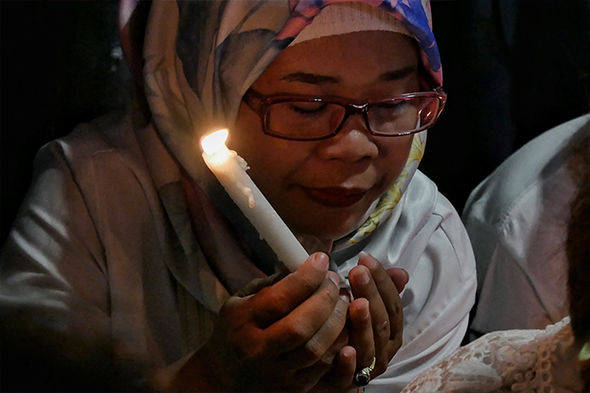 Indonesia has seen a wave of bombings

They were part of the Islamic-state inspired group Jemaah Ansharut Daulah.

Their bombs went off at three churches in the city and police claimed they “secured” an unexploded device in a fourth church.

Police ordered the temporary closure of all churches in Surabaya and a large food festival in the city was cancelled.

At least 18 people were killed including six perpetrators and 40 others were injured.